Below is an excerpt Lichens of Sweetgrass: Indigenous Wisdom, Scientific Knowledge, and the Lore of Plants by Robin Wall Kimmerer.

Disclaimer: If you purchase products through the Bookshop.org link on this page, Science Friday may receive a small commission which supports our journalism. 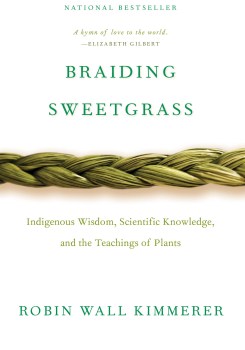 Lichens of Sweetgrass: Indigenous Wisdom, Scientific Knowledge, and the Lore of Plants

My sister’s gift to me for Christmas was a set of magnetic fridge tiles in Ojibwe, or Anishinabemowin, a language closely related to Potawatomi. I spread them out on my kitchen table, searching for familiar words, but the more I searched, the more concerned I became. Among the hundred or more tiles, there was only one word that I recognized: megch, Thanks. The small sense of accomplishment from months of study passed in a moment.

I remember flipping through the Ojibwe dictionary she sent and trying to decipher the tiles but the spelling didn’t always match and the print was too small and there were far too many variations on a single word and I had that feeling that this was just too hard. The threads in my brain knotted and the more I tried, the tighter they became. The pages blurred and my eyes lingered on one word – a verb, of course: “to be a Saturday”. pfft! I threw the book down. Since when is Saturday a verb? Everyone knows it’s a noun. I grabbed the dictionary and turned more pages and all sorts of things seemed to be verbs: “to be a hill,” “to be red,” “to be a long sandy beach,” and then my finger rested on it wiikwegamaa: “to be a bay.” “Ridiculous!” I scolded in my head. “There is no reason to make it so complicated. No wonder nobody talks about it. A clumsy language, impossible to learn, and what’s more, it’s all wrong. A cove is definitely a person, place, or thing—a noun, not a verb.” I was ready to give up. I had learned a few words, done my duty to the language inherited from my grandfather. Oh, the spirits of the missionaries in the boarding schools must have rubbed their hands in joy at my frustration. “She will surrender,” they said.

READ:  Engg not just about computer science and IT. Can we stop this mad rush?

And then, I swear, I heard synapses snap. An electric current hissed down my arm and through my finger, practically searing the page that had that one word written on it. At that moment I could smell the water of the bay, see it swaying on the shore and hear it trickling onto the sand. A cove is only a noun if it is water dead. When bay is a noun, it is defined by people, caught between its banks and enclosed by the word. But the verb wiikwegamaa-to be a cove – frees the water from bondage and lets it live. “Being a bay” holds the miracle that for this moment the living waters have chosen to shelter between these shores and converse with cedar roots and a flock of baby mergansers. Because it could also be different – a stream or an ocean or a waterfall, and there are verbs for that too. To be a hill, to be a sandy beach, to be a Saturday are all possible verbs in a world where everything is alive. Water, land and even a day, the language a mirror to see the vitality of the world, the life pulsing through all things, through pines and nuthatches and mushrooms. This is the language I hear in the woods; this is the language that lets us speak of what is surging around us. And the remnants of boarding schools, the soap-wielding missionary spirits, hang their heads in defeat.

This is the grammar of animation. Imagine you see your grandmother standing at the stove in her apron and then say of her: “Look, they are making soup. It has gray hairs.” We may giggle at such a mistake, but we also shy away from it. In English we never refer to a member of our family, or indeed to any person other than it. That would be an act of disrespect. It robs a person of their selfhood and kinship and reduces a person to a mere thing. Thus in Potawatomi and most other indigenous languages ​​we use the same words to address the living world that we use for our family. Because they are our family.

To whom does our language extend the grammar of animation? Of course, plants and animals are alive, but as I learn, I’m discovering that the Potawatomi understanding of what it means to be alive differs from the list of characteristics of living things that we all learned in Biology 101. In Potawatomi 101, rocks are animated, as are mountains and water and fire and places. Beings infused with Spirit, our sacred medicines, our songs, drums and even stories are all animated. The list of inanimates appears to be smaller, filled with human-made objects. Of an inanimate being like a table we say:What is it?” And we answer Dopwen yew. table it is. But of apple we have to say: “who is that being?” And answer Mshimin greed. Apple that is essence.

Yawe– the animated be. I am, you are, he/she is. To speak of those obsessed with life and spirit, we must say yaw. By what linguistic confluence say Yahweh of the Old Testament and yaw of the new world both fall from the mouth of the venerable? Isn’t that exactly what it means to be, to have the breath of life within, to be an offspring of creation? In every sentence, language reminds us of our kinship with the whole living world.

English doesn’t give us many tools to incorporate respect for animation. In English you are either a person or a thing. Our grammar urges us by choice to reduce a non-human being to one itor it must be erroneously gendered as a he or a you. Where are our words for the simple existence of another being? where is ours yaw? My friend Michael Nelson, an ethicist who thinks a lot about moral inclusion, told me about a woman he knows who is a field biologist whose work deals with nonhumans. Most of their companions are not bipedal, and so their language has changed to accommodate their relationships. She kneels along the path to inspect a series of moose tracks and says, “Someone was this way this morning.” “Someone’s in my hat,” she says, shaking out a deer fly. someone, not something.

When I’m in the forest with my students teaching them the gifts of plants and how to call them by their names, I try to be careful with my language, to be bilingual between the lexicon of science and the grammar of animation. Although they have yet to learn scientific roles and Latin names, I hope I will also teach them to know the world as a neighborhood of nonhuman inhabitants, to know that, as ecotheologian Thomas Berry has written, “we must say of the universe that it is a community of subjects, not a collection of objects.”

Out of Lichens of Sweetgrass: Indigenous Wisdom, Scientific Knowledge, and the Lore of Plants by Robin Wall Kimmerer (Minneapolis: Milkweed Editions, 2013). Copyright © 2013 by Robin Wandkimmerer. Reprinted with permission from Milkweed Editions. milkweed.org.

Robin Wall Kimmerer is a mother, scientist, decorated professor and inductee member of the Citizen Potawatomi Nation. She is the author of Lichens of Sweetgrass: Indigenous Wisdom, Scientific Knowledge, and the Lore of Plants, which has brought Kimmerer great recognition. Kimmerer lives in Syracuse, New York, where she is a SUNY Distinguished Teaching Professor of Environmental Biology and the Founder and Director of the Center for Native Peoples and the Environment.

Revealed: Babies have air pollution particles in their lungs while they’re still in the WOMB