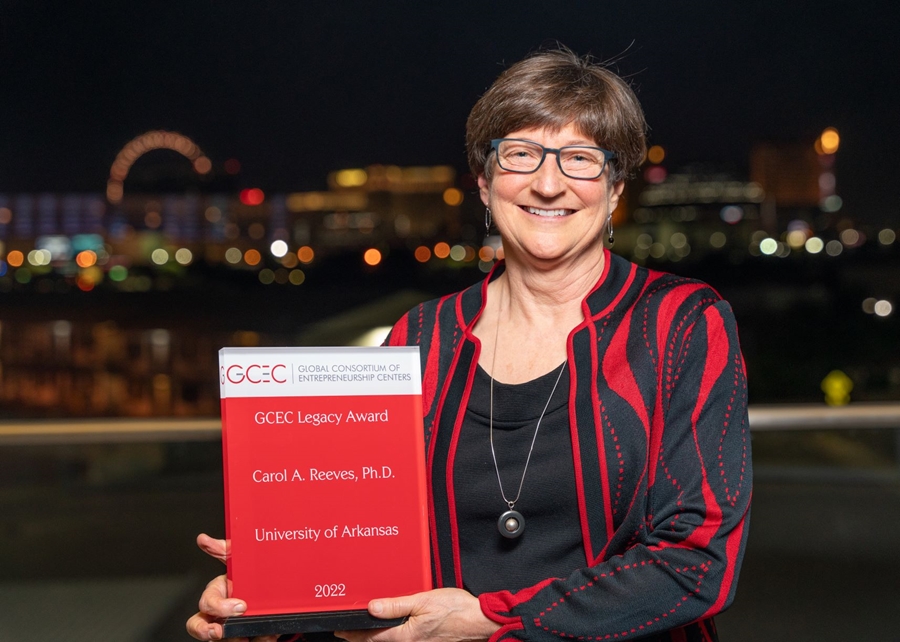 LAS VEGAS — When Carol Reeves first started developing entrepreneurship programs at the University of Arkansas, she and one other part-time person oversaw all entrepreneurial activities on campus.

“When we started … the cost of sending seven team members to the GCEC conference exceeded our annual budget,” Reeves mused.

Reeves, who retired from the U of A in 2020 and was the impetus behind its thriving entrepreneurship programs, praised the students, mentors and fellow team members who helped transform the entrepreneurial ecosystem at the university and the throughout Arkansas.

Thinking about his legacy, Reeves added that there are two groups he hopes to impact: students and the team that succeeded him.

“(The students) have changed the entrepreneurial ecosystem in the state of Arkansas,” Reeves said. “The depth and breadth of the programs they (OEI) have created and run just amazes me.”

Reeves joined the U of A in 1990 and has been a professor in the Sam M. Walton College of Business, teaching courses in entrepreneurship and new venture development, international business, strategic management and negotiation. In 2005 he was appointed the Cecil W. and Gwendolyn Stuckey Cupp Applied Professorship in Entrepreneurship.

Between 2009 and 2018, Reeves’ student teams won more national business competitions than any other university in America. Reeves retired in 2020 as associate vice provost for entrepreneurship.

The Consortium’s Legacy Award is a fitting honor for Reeves, according to Anne O’Leary-Kelly, senior associate dean for faculty affairs and academic departments at Walton College.

“For me, legacy implies something greater than the sum of its parts. It’s more than individual achievement. It suggests a lasting impact and it suggests a self-enriching effect,” said O’Leary-Kelly, who often collaborates with Reeves.

“These are all characteristics that describe Carol Reeves’ impact on entrepreneurship and innovation in the state of Arkansas.”