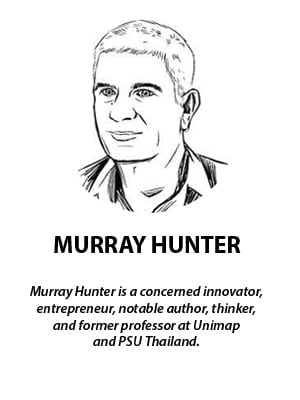 Racial politics is one of the last relics of the British colonial era. To facilitate Malay independence, the British insisted on negotiating with representatives of all major ethnic groups. That was in the early 1950s, almost seventy years ago.

Race-based politics has now become a domain, binding the nation into retrospective existence. Today’s politics reflect images of the past, while the rest of the world presents new challenges.

Religious narratives are pushing the nation back as the rest of the world overtakes Malaysia economically.

The focus on race-based politics has only led to a class-based society that exhibits an ignorance of sustainability, rent-economy and non-innovation-based development, with no meritocracy.

Malaysia has evolved from a formidable Asian tiger into a homeless street cat. More and more people are looking for better opportunities abroad. This is a multicultural phenomenon.

The New Economic Policy has long since served its purpose. It has been abused and used as a cover to feed a selfish elite with little benevolent towards their own. NEP needs to be reformed from race-based to needs-based. The focus on equal opportunities must be redesigned in the direction of needs orientation.

This will best help the Malays and other Bumiputeras who really need a safety net. Poverty is a national issue where the advancement of individuals regardless of ethnicity is our national concern.

Malaysia now faces many problems that need to be addressed head-on. These must be solved with new guidelines and strategies.

How will Malaysia grow economically in a sustainable way without selling itself to foreign prospects? How will the Malaysian economy change from rent-seeking to an innovation-based economy? How will Malaysia create full employment with a second pool of foreign workers keeping wages low? How will Malaysia turn GLCs into assets that directly benefit the Rakyat?

Malaysia needs diversity so that it can develop a society based on meritocracy and innovation to compete with the rest of the world. Malaysia must dismantle restrictive market regulations so that there are equal economic opportunities for all. As long as Malaysian government and politics are rooted in religion, the rest of the world will outperform Malaysia.

We need a multiracial political system

As we head towards GE15, both sides of the political spectrum are jostling for positions. This is done on the Malay-centric side in the name of “Malay Unity”. while there is still no clear message on the other side.

The issues of inflation, poverty, cost of living, food security and employment are rarely mentioned in current narratives. This must change if Malaysia is to be saved from future socio-economic catastrophe.

The Rakyat want the political parties to solve their day-to-day problems. Many within the Rakyat envision a united and unified force to fight for and solve their problems that have nothing to do with race.

This immediately requires a unified opposition coalition that is a problem and not based on race.

A fully fledged multiracial policy can be achieved in two stages.

The first step will be to tackle GE15 in a united coalition style, “reformasi” style. The opposition must show passion and desperation to get Malaysia back on a progressive path that leaves no part of Malaysia behind.

Also Read :  Aftermath of 2020 election left Fox News between Trump and the truth

The second step must be a merger into a single multiracial and issue-oriented political party. This must transcend the ego of individual executives who fear losing position within a group.

There is an urgency for this. Failure to act before GE15 will allow the current Malay-centric parties to once again consolidate their power well into the next decade. If this is the case, the government will tend to be the same, with many power struggles affecting political focus.

A multiracial coalition or party will bring to the fore a clear alternative vision of Malaysia. Then it’s ultimately up to the Rakyat to decide what they want for Malaysia.

It is hoped that any group forming the opposition after the parliamentary elections will be able to scrutinize the incumbent government and restore real checks and balances in the governing process.

Multiculturalism is a Malaysian dream. Now it’s up to the politicians to deliver.