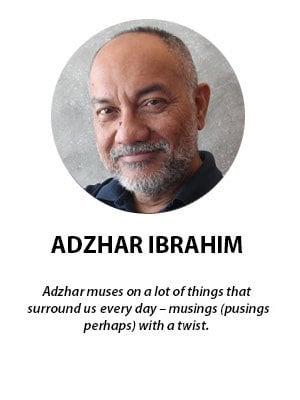 I’ve heard half of our population, our women, wake up and stand up for some change.

Perhaps international reports, like the one about the Taliban in Afghanistan taking girls out of school to focus on housework and parenting, have sparked something in them. Or that so many countries are now so adeptly run by women. Whatever it is, more power to her.

At the recent conference of the Barisan Nasional Women’s Wing, they called, among other things, for a special university for women. That seems to be happening, and I’ve taken the liberty of calling it the Women Institute of Technology, Careers and Housework. You are welcome!

They also want a 30 percent quota of parliamentary seats. Now 30% is a time-honored Malaysian quota that requires a special positive action program, probably called the New Empowerment Policy (NEP), to help them reach that goal, which of course guarantees they never will.

They also want a women-only bank. Here, and you can thank me later, I’ve tentatively called it the Women Financial House, or WFH. When asked where they expect to make money, women can now honestly answer by saying WFH!

But what if you called for something even more radical – the abolition of the women’s wing of Malaysian politics altogether?

The existence of such wings suggests that political parties are mostly for men, with some concessions to women, an oh-ok-if-you-really-must-have gesture. It’s almost as bad as having a youth department.

Or maybe not. Youth wings of political parties are worse. They are there to mindlessly take in all the stupid fights that the main wings have declared and leave the thinking to the adults.

Also Read :  Margaret Thatcher's maternity leave sparked my political ambitions – but there will be no lording it up

In our society, young people are expected to keep a respectful distance from adults, to show daring and courage (but not brains), and to wait patiently for their seat at the main table.

That’s stupid. In other areas of human achievement, the youth reign supreme, while in Malaysian politics a bunch of geriatrics monopolize the task of leveling the country while the young revel in the occasional scraps thrown at them.

The world doesn’t quite work that way. Einstein was 25 when he gave the world E=MC2. He was barely in his mid-thirties when he topped it all off with his general theory of relativity that gave the world black holes.

While the elderly are said to have experience and wisdom, these “benefits” are often just war-weariness, over-caution, and fear of change, or rather fear of losing privileges that old age has brought them.

This is especially true for the Kampungs. The youth in Kampung try to look older because the society there respects older people more than younger people.

On a related matter, I support the women’s wing’s desire to see the constitution amended to give women equal rights with men when it comes to the citizenship of children born to them outside of Malaysia.

Funny isn’t it: a child born abroad to a woman whose husband is Malaysian is automatically a Malaysian citizen – but a paternity test may not actually show that the child is a descendant of the father!

But every child born to a woman is clearly an descendant of the woman – no maternity test required. (Well, there’s the thing about test tube babies, but if they’re willing to go to all that trouble…)

While we are at it, I would like to propose some constitutional amendments myself. Here goes…

Nobody over 50 can become prime minister, cabinet or minister of state. Beyond that age they would have been so polluted by politics that they would probably have lost whatever ideals or principles they might have started out with.

And if they are already in office by that time, they must retire at 60 or the country’s official retirement age.

The same age rule should apply to the senior civil service positions of Director-General and Secretary-General. If civil servants have not reached such a position by that age, they should be compensated if they want to go and try their luck in the “real” world.

Let the government’s loss be the private sector’s gain.

Government would benefit from having people with energy and idealism undiminished by decades of turf wars, and the business sector would gain some wisdom and experience.

A common argument is that society would lose the experience, knowledge and wisdom of these people. My answer is that we are opening up two-way traffic between the public and private sectors, which should benefit the country immensely.

These “very experienced” people know so much about today’s world, be it economics, technology, the environment or the world. For example, I wouldn’t trust them with our country’s digitization agenda, even if they could actually spell digitization!

I have daughters who don’t want to be in the women’s wing of any political party if, God forbid, they ever go into politics.

You would want to kick ass in the main wing. What they lack in wisdom they would make up for with energy, passion and an understanding of how today’s world works.

I know those rules would mean I would never make it to the heights of politics here. But I probably wouldn’t want to live in a country ruled by someone like me, and neither should you!

Let the old folks who would have to give way to the young join me in a happy retirement writing sarcastic hypocritical messages against the world while enjoying our Teh Tarik. It makes a lot of fun!

The views expressed are those of the author and do not necessarily reflect those of FMT.