[I would mention the study, main author and journal as a little foreplay here.]

The researchers examined the immunization records of 1,574 NYC public schools “that do not exclusively serve special needs students.” Let’s start with some facts about the students. [1]

There are a number of factors that can contribute to or affect vaccination rates. There may be issues of parental access, knowledge and preference (judgment). [MIGHT WANT TO ADD UNFOUNDED FEARS]. For context, here are some rough generalizations about NY City’s five boroughs. Manhattan is the wealthiest, most educated and white. The Bronx is the poorest, least educated and least white. Brooklyn is somewhere in between. Queens is a true UN of nationalities, but Asians predominate. Staten Island is MAINLY home to New York’s middle-class workers, teachers, firefighters, and police officers; It is also the only Republican district in the city. [2]

What seemed to be driving vaccinations? 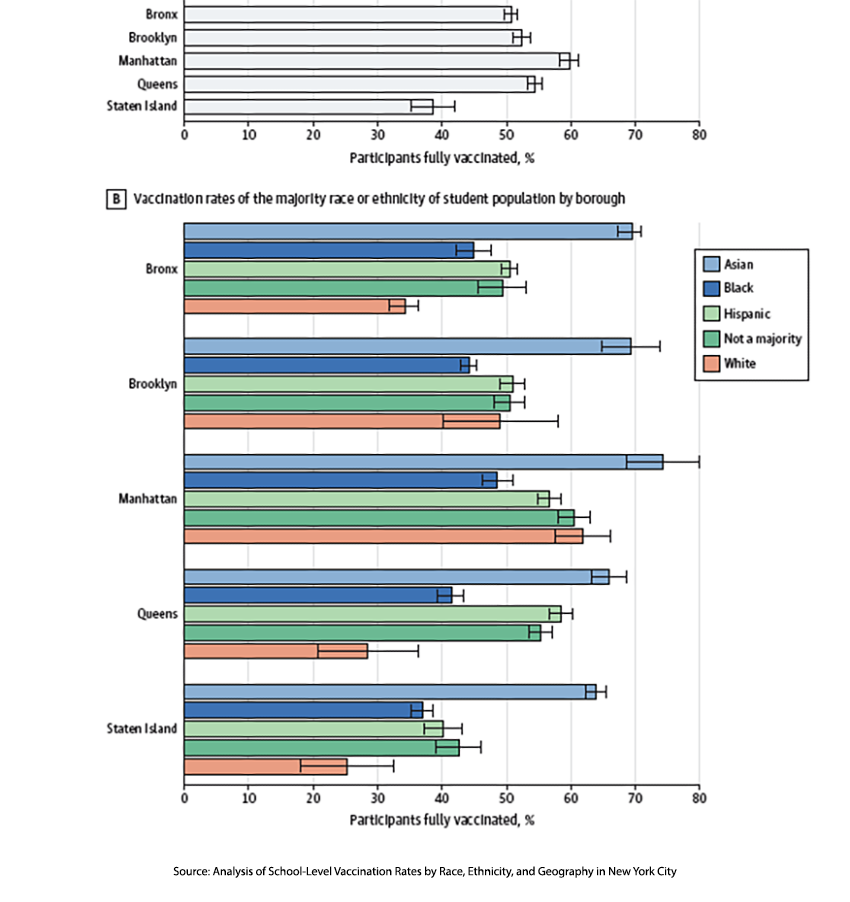 The answer remains speculative, but whatever Devil [I SUGGEST FUCK, BUT THATS JUST ME]let’s speculate.

No wonder Manhattan had the highest vaccination rate — educated, wealthy, with no access issues. Staten Island had the lowest – educated, financial problems typical of the middle class (which we may disregard since all vaccinations are free) and no access problems. The most significant difference is the political affiliation of the parents. Let me be quick to say that being a Republican doesn’t mean you’re anti-vaccination; it’s just a social marker for some of your other thoughts, say a distrust of the CDC or the COVID vaccine. [3]

Asians once again led the way in vaccinations, no surprise. Anyone who’s walked or worked in NYC knows that Asians wore masks when they were sick or during “flu season” long before COVID reared its ugly head. More Hispanics than blacks were vaccinated in the counties. Again, both groups had similar educational and financial demographics, and for some Hispanics, English was a second barrier. Why the difference? It cannot be the desire to protect their children. Is there a trust difference [I DONT KNOW IF YOU WANT TO GET INTO TUSKEGEE HERE BUT IT WAS PART OF THE STORY TO SOME EXTENT]? Finally, with the exception of Manhattan and most of Brooklyn, whites were the least likely to be vaccinated. ??WHY?

It’s not about race, finance, education or access. For me, immunization rates for children in New York schools is about parental preference — it’s about who the parents trust, and that’s related to their education and their cultural and ethnicity.

[1] A quick caveat: when comparing the number of people under the age of 18, based at least on the 2010 NYC census, about one-third of white children are not enrolled in NYC public schools; they are probably in private institutions and are not counted in this study.

[2] Please don’t write or comment on the lack of nuance in my characterizations; I don’t just paint with a wide brush, but with a roller. I know all counties contribute to the City of Oz.

[3] This raises a question that has never been asked or answered. President Trump should deserve credit for the rapid development of the COVID vaccines; Operation Warp Speed ​​is his baby. So why are so many of his supporters opposed to what is perhaps his most important contribution to public health?