MORGANTOWN, W.Va. – A new era in healthcare begins in Morgantown with the opening of WVU Children’s Hospital. The 150-bed facility will provide a new level of care and medical resources to seriously injured or ill children. 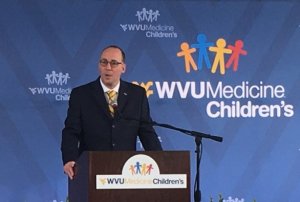 “I don’t know that we could do anything more impactful for the state than to ensure we have the full staff, programs and physical facility to care for West Virginia’s children,” said Albert Wright, President and CEO of WVU Medicine ribbon cutting ceremony on Saturday.

The $215 million facility not only increases the number of beds in the existing children’s facility, but also improves the care options and transforms the NICU from an open ward to single rooms. Private rooms now allow a parent or guardian to stay with children.

The facility also includes the Cecil E. Roberts WVU Children’s Heart Wing. Roberts, a longtime UMWA president and a sixth-generation miner, said he was born in a company home where only his mother cared for him and that this is a continuation of UMWA’s commitment to healthcare.

“We’re just honored to be a part of it,” Roberts said. “We’re continuing the march that our grandfathers started in the 1940s and we’re just proud of that.”

Former WVU athletes including Jeff Hostetler, Mark Bulger, Pat McAfee, Jerry West and former WVU coach Don Nehlen all donated to a special floor – the 10th floor Family Resource Center. On the floor are jerseys, a big-screen TV, and future plans for Monday Night Football and other activities to provide diversion for healing children and families.

“I don’t know when was the last time I was so excited,” Hostetler said on Saturday. “That was probably when my kids were born, but it’s great to be a part of it.”

The Floor Walk leads through the history of the presented athletes and contains a timeline of the sporting successes of the WVU. Nehlen said the floor was like no other in the country and is sure to attract national attention in the future.

“I’m looking for ESPN to come up here and tape before our football games on Saturday,” he said. “If they take a look, it will be something special for them.”

Patients will begin colonizing the facility on September 29.

“It’s really weird, it’s one of those facilities that you build and you hope nobody will ever need,” Wright said. “But they will be there when they do and that will have an impact on the state.”

WVU Medicine operates the state’s only Level 1 adult trauma center, manages two hospitals and owns 17 others, including JW Ruby Memorial Hospital in Morgantown, which is connected to the new Children’s Hospital.