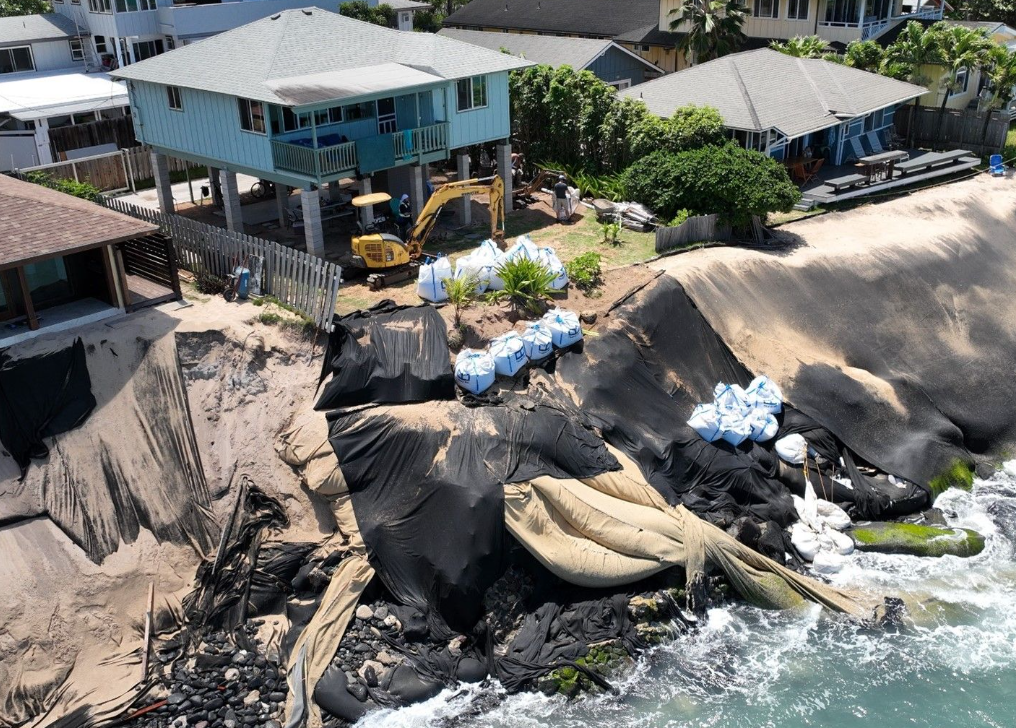 (HONOLULU) — The plight of public beaches and twenty homes atop the dunes at Paumalu Ahupua’a on O’ahu’s North Shore has consumed Michael Cain and his associates.

This year, after seventeen years with DLNR, Cain was appointed Administrator of the DLNR Office of Conservation and Coastal Lands (OCCL). He and his team continue to wrestle with what to do with coastal homes with expired, temporary emergency government permits to “prop up” the land beneath their foundations to prevent the forces of erosion from tipping them onto the beach and into the ocean. All homes in Paumalu border public beaches within a State Conservation District.

“Earlier this month we surveyed the area with a drone and it was found that unauthorized shore stabilization work, in violation of Conservation District rules, was continuing on a number of properties,” Cain explained. “This survey demonstrates the sheer scale of the situation we face as regulators and the desperate and illegal measures some homeowners continue to employ.”

READ:  All About David and Victoria Beckham's 4 Kids

Aerial photos show some houses perched on sandy ground just above the beach. Large tubes filled with sand litter the beach below. Equal-sized fabric curtains drape the slopes in front of some structures down to what remains of the public beach. “It’s a real mess and the photos show it clearly,” says Cain.

“Leaving these structures (erosion control structures) in place endangers the public beach, restricts access to them for much of the year, and pollutes the nearshore marine and coastal environment with debris. They are said to be temporary to give landowners time to plan the relocation of their homes and cesspools, which few have done. There could be an even greater environmental catastrophe if houses and their cesspools collapse into the sea. This is a complicated and difficult situation to resolve,” Cain added.

The drone investigation resulted in the creation of a document detailing each home’s permitting history, erosion control methods expired, still in place, and any past or current enforcement actions. “The current system of filing enforcement actions with the Board of Land and Natural Resources, working our way through the process of contested cases brought by landowners for alleged violations, and then following up when cases are challenged in court is slow and inefficient. Unfortunately, this process is the only enforcement tool OCCL currently has at its disposal,” Cain explained.

Shorelines are inherently dynamic. Most of our beaches are affected by chronic erosion. The natural, seasonal cycle of beach widening and narrowing contributes to long-term beach loss. In the past, strengthening shorelines like levees was the solution to protecting homes, but coastal experts now know they destroy beaches. OCCL estimates that Hawaii has lost more than thirteen miles of beaches to erosion and seawalls.

“Many of the structures captured in our drone footage received emergency permits, allowing landowners to place sandbags on public lands to temporarily protect their property while landowners worked on a long-term solution to protect or relocate their property,” Cain noted. “We claim that none of the permit holders in Paumalu have met all the conditions of their permit. Their permits have expired and the sandbag structures have become de facto levees, jeopardizing the future of the beach.”

OCCL advises that leaving erosion control structures in place creates an unmanaged hazardous situation that threatens public trust resources. Resolving the crisis requires a coordinated effort from all branches of the state and districts.

Cain concluded, “We are actively working with county planning departments and state legislatures to explore and find solutions. We are not alone. Coastal communities around the world face similar situations. We speak of “retreat” but no one has successfully implemented a retreat like us in a densely populated area with little space to move inland. We don’t have many role models to follow and Hawaii needs to take the lead in finding solutions.”