The line of crosses stretched into the distance in a field in the Canadian province of British Columbia, as seen through the lens of Canadian photojournalist Amber Bracken. Titled Kamloops Residential Schoolthe wooden constructions stand in front of a stormy sky, naked except for the cloth around their arms.

“[The] Red dresses hanging from roadside crosses are a reminder of this [Native American] Children who died at Kamloops Indian Residential School, a facility created to assimilate Indigenous children after 215 unmarked graves were discovered,” read the caption, which Bracken believed to be the New York Times on June 19, 2021.

“Residential schools were invented in the 19thth Century as part of a policy of assimilation of people from various indigenous communities into Western and predominantly Christian culture. More than 150,000 children attended boarding schools and at least 4,100 students died […] as a result of abuse, neglect, illness or accident,” the caption reads.

The picture made an impression. Pope Francis apologized to Canada’s Indigenous people for the Catholic Church’s role in running the hostels during his visit to the country last July. 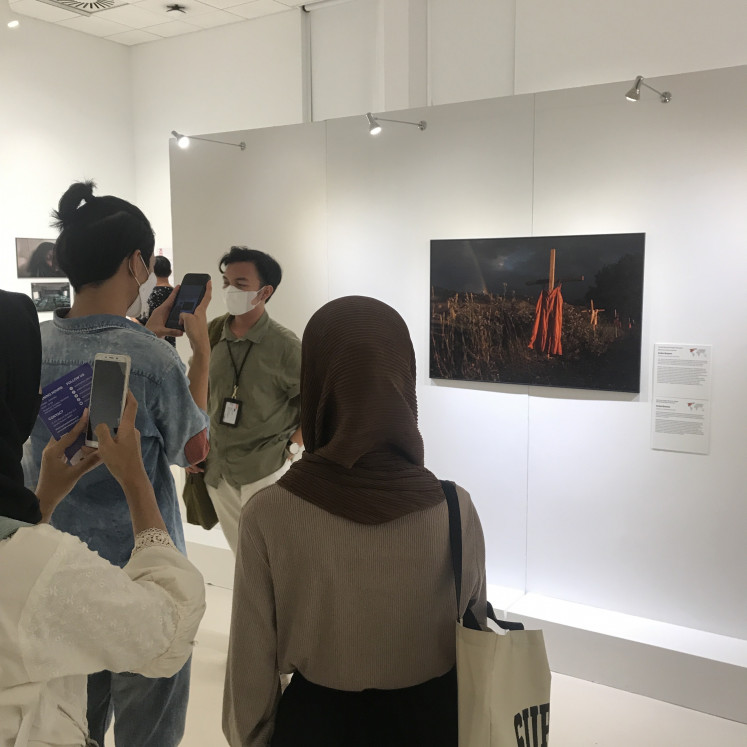 Named the World Press Photo (WPP). Kamloops Residential School as photo of the year. WPP global jury chair Rena Effendi hailed the photo “because it encapsulates a global history of colonial oppression that needs to be addressed to address the challenges of the future.”

Kamloops Residential Schools format has made the photo the centerpiece of the 65th WPP photo exhibition at the Erasmus Huis Cultural Center of the Dutch Embassy in Jakarta and other places around the world.

On his website worldpressphoto.orgBracken’s work and other photos, which made up the regional winners of last year’s WPP competition, were “selected by an independent jury from 64,823 entries from 4,066 photographers in 130 countries […] [down to] 24 photographers from 23 countries”, including Indonesia.

“The WPP has become more diverse since its inception in 1955. Back then, the winners were mostly white males, which made the competition unbalanced,” said WPP exhibition curator Marika Cukrowski.

“But now the WPP is taking the step to be more diverse, representing the work of different groups, women and binary people. The competition also uses a regional model from Africa, Asia and Oceania, Europe and the Americas.”

The photo project of Indonesian photojournalist Abriansyah ‘Berto’ Liberto haze was one of the winning entries in the WPP’s long-term projects for the Southeast Asia and Oceania region.

That tribune The newspaper photographer uses black-and-white photography of the forest fires in Sumatra to simulate the eye-stinging effect of the flames, as well as other effects in Indonesia and other Southeast Asian countries.

“The photos have been taken in South Sumatra’s Ogan Komering Ilir and Ogan Hilir districts near the provincial capital Palembang since 2015, when the two areas bore the brunt of wildfires caused by combustible peatlands. The oil palm plantations in both districts were draining groundwater that would have been used to extinguish the fires,” said Berto, whose awards include the 2015 Adinegoro Indonesian National Press Award and the Photo of the Year Award at Anugerah Pewarta Foto Indonesia.

“[Haze] presented an in-depth look at one of Southeast Asia’s greatest and longest-running environmental challenges, affecting millions across the region […] [The photo project] goes beyond raising awareness, but also creates space for reflection,” said the jury about Berto’s work.

The photos vividly show the struggles of people from different walks of life dealing with the wildfires, from President Joko “Jokowi” Widodo, who saw the blazes firsthand, to schoolchildren wearing masks to ward off the smoke. Berto masterfully uses black and white photography to further focus on the subject and its personal impact on him.

“The blazes forced schools in Palembang to close because smoke contains particles that are dangerous if inhaled through the lungs. This is dangerous for all of us, especially school children like my children, and reminds us that clean air is a human right.”

The WPP acknowledged Berto’s concerns, citing a Harvard University study that “linked the 2015 haze to more than 100,000 premature deaths in Indonesia, Malaysia and Singapore.” [The United Nations children’s agency] According to UNICEF, wildfires in Kalimantan and Sumatra in 2019 put nearly 10 million children at risk from air pollution.” But the statistics said little to some people.

“I may not have faced threats or harassment like other journalists,” Berto said, “but I have encountered skeptics who have claimed the photos are hoaxes.”

Brazilian photojournalist Lalo de Almeida’s gaze is just as adept, as his long-term project shows Amazonian dystopia, as embodied in his aerial view of the Belo Monte Dam on the Xingu River, Brazil. The hollowed-out landscape resembles the Middle-earth territory of Tolkien’s Isengard Lord of the rings dominated the work of photographer Folha de Sao Paulo/Panos Pictures, along with the adverse effects of the dam.

“More than 80 percent of the [Xingu] The river was diverted from its natural course for the construction of the hydroelectric power station [Belo Monte Dam] Project. The drastic reduction in water flow affects both the [natural] environment and on the livelihoods of traditional communities living downstream of the dam,” the WPP noted of the work.

The image and images, which show open-pit gold mines, growing cattle ranches and the poverty of indigenous people due to deforestation of the Amazon basin and increasing industrialization, showed the region as the epicenter of climate change. Above all, it became apparent how political interest exacerbates the crisis.

“Conservation regulation and enforcement has been eroded under the government of Brazilian President Jair Bolsonaro. The President is promoting farming and mining in protected areas, arguing that this will fight poverty,” the WPP noted.

“Bolsonaro frequently speaks out against environmental protection measures and makes comments that undermine attempts by Brazilian courts to punish offenders. Environmentalists say this encourages deforestation and creates a climate of impunity.” 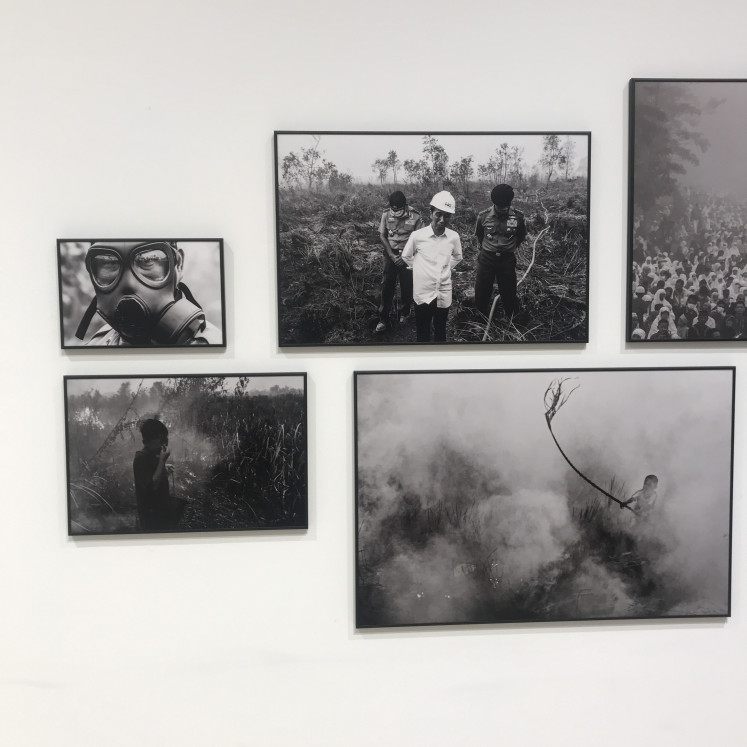 Erasmus Huis director Yolande Melsert said the photos showed “the temperature of the world situation. It makes us think about our responsibility to this world, to care about nature and people,” she noted. Melsert added that the WPP exhibition would be held in conjunction with the Jakarta International Photography Festival in the Blok M district of South Jakarta.

“Freedom of the press is an essential part of democracy, although it has been reversed in at least 53 countries. But while misinformation and disinformation remain a major threat to the free press, good photos can touch, inspire and connect with us to make a difference,” she said.

The photo project of the American photographer Louie Palu Political year zero visually chronicles how conspiracy theories, disinformation, and misinformation seeded by then-President Donald Trump before and after his defeat in the 2020 presidential election, as well as the COVID-19 pandemic, helped tear the United States apart.

“[Political Year Zero] gives us a cursory insider account of the myriad of scenes that led up to this [insurrection on Jan. 6, 2021]. The style resembles that of an unwitting eyewitness and slows down into an otherwise chaotic, spectacle-filled event,” the WPP jury observed Palu’s images.

Whether vaccination activists at 17th Century beak masks to shock public to get COVID-19 vaccine Thousands of Trump supporters storming Congress January 6, 2021 Political year zero is known for its almost apocalyptic imagery. Palu amplifies this effect by using elongating shadows to show the seemingly darker turn that US politics has taken during the Trump administration.

The WPP photo exhibition is available in the Erasmus Huis until October 1st. The event then moves to Yogyakarta, where it will be held from October 8th to 30th at the Pendhapa Art Space.